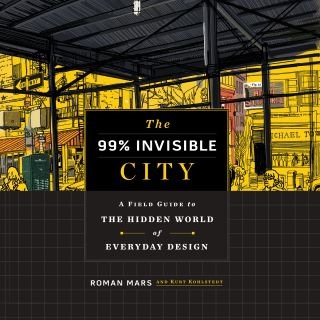 A Field Guide to the Hidden World of Everyday Design

From the creators of the wildly popular 99% Invisible podcast, comes a guidebook to the unnoticed yet essential elements of our cities. Narrated by Roman Mars, with a bonus Q&A and a Full Episode of 99% Invisible.

Have you ever wondered what those bright, squiggly graffiti marks on the sidewalk mean?

Or stopped to consider why you don't see metal fire escapes on new buildings?

Or pondered the story behind those dancing inflatable figures in car dealerships?99% Invisible is a big-ideas podcast about small-seeming things, revealing stories baked into the buildings we inhabit, the streets we drive, and the sidewalks we traverse. The show celebrates design and architecture in all of its functional glory and accidental absurdity, with intriguing tales of both designers and the people impacted by their designs.

Now, in The 99% Invisible City: A Field Guide to Hidden World of Everyday Design, host Roman Mars and coauthor Kurt Kohlstedt zoom in on the various elements that make our cities work, exploring the origins and other fascinating stories behind everything from power grids and fire escapes to drinking fountains and street signs. With deeply researched entries, The 99% Invisible City will captivate devoted fans of the show and anyone curious about design, urban environments, and the unsung marvels of the world around them.

ROMAN MARS is creator and host of 99% Invisible, the wildly popular podcast exploring architecture and design, for which he produced the most successful crowdfunding campaigns for a podcast in Kickstarter history. Fast Company named Mars one of the 100 Most Creative People in 2013 and he was a TED main stage speaker in 2015.

KURT KOHLSTEDT is the digital director and producer of 99% Invisible. Before joining the show, he founded a series of successful online magazines on cities and design, starting with WebUrbanist in 2007. He holds a graduate degree in architecture from the University of Washington’s College of Built Environments.